Did you see? Magan Vernon's The Only Exception is out today. I haven't read this one yet, but the premise caught my attention. Also, Magan is due...like REALLY due, as in to have a human baby, in nine days.  So, if you buy this new release you help support another, more important, new release! Check this one out.  It has great reviews on Goodreads and promises to be an entertaining read. 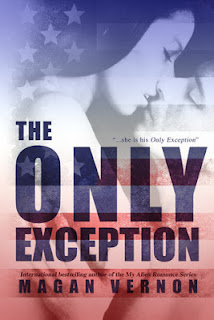 **Due to sexual content and heavy subject matter, this book is recommended for ages 16+**


Fiercely liberal Monica Remy prefers to blend in. Despite her tattoos, piercings, and outspoken personality, she transferred to Central to escape—before she finds out that her next door neighbor is the uber conservative senator’s son, Trey Chapman.

No matter how hard she tries to avoid Trey, he still finds a way to get under her skin. Monica can’t stand his crisp white shirts or his staunch views on women. But she can’t help counting every freckle on his face and wondering what it would feel like to have him stop talking politics and kiss her.

A class debate project forces the unlikely pair to work together, and the political lines are blurred in late-night make out sessions. But despite their fiery chemistry, Trey’s politics threatens to smother their relationship for good.