Out of The Closet

I published this story a couple of years ago as part of Fridayflash.  Since it's Halloween week, I thought I would repost.  It's one of my favorites. Enjoy!

As he did before every appointment, Dr. Silverman wrapped his sweater around his shoulders, Mr. Rogers style. Everything about the man screamed “trust me” from the smile lines bordering his soft brown eyes to the picture of his family, lovingly displayed on his desk. But after six months, I’d never told him the truth. I was beginning to wonder why.

“Violet,” he began. “Tell me about your week. How are things going?”

His disappointment hung in the air between us. “That’s great, Violet, but how did you get those cuts on your arms? And does it have anything to do with the bags under your eyes? It looks like you haven’t been sleeping.”

I lowered my head. The burden of my secret rested against my teeth, ready to spring itself into that space. What was I waiting for?

“I have skeletons in my closet,” I blurted.

“All of us have things in our past we’re not proud of,” Dr. Silverman said.

“No. I mean, I have actual skeletons in my closet.”

Dr. Silverman’s smile melted. “Violet, are you telling me you have a dead body in your closet? “

“Yes. Well, more than one actually.”

The shiver that ran up his spine let me know I’d blown it. I didn’t want to scare him away, so I clarified. “I didn’t kill anyone, Dr. Silverman. It’s just how they reach me.”

“How they reach you?”

“Right. See I’m the new Charon, the person who ushers the dead across the river Styx. I’m still not clear exactly how I got the job but just between you and me, I don’t think my mother is being totally honest about who my father was. But regardless, I’m in school all day and then there’s volleyball and these appointments. There are a lot of souls waiting, so I end up working most of the night. Plus you have the hell hounds and the banshees trying to pick one off here or there. It’s not an easy job. Gosh what I would do for a nap, you know?”

Dr. Silverman blinked at me. He sat so quietly, I could hear the clock tick.

“You must feel …overwhelmed by the responsibilities you have and betrayed by your mother’s deception. Sometimes strong feeling like these can confuse us—“

I shook my head and waved my hands to interrupt. “Come with me, Dr. Silverman.” I turned toward his office closet.

“Are you going to take me to Hades through my closet?” Dr. Silverman asked.

I nodded. He walked to the closet and threw it open forcefully, revealing a set of tennis racquets and a gym bag. “There’s nothing in here but my underused athletic equipment, Violet.”

“Grab the racquet.” I grabbed his hand and leapt past the door. The back of the closet broke away, as it always did, and we were welcomed by the smell of sulfur. My feet met volcanic rock on the shore in front of the ancient vessel that was mine to command. The dead crowded in, their bones rattling as they jostled for position.

“I’ve only got a few minutes. Form a single file line and I’ll get to as many of you as I can,” I commanded the group of skeletons. I turned to Dr. Silverman whose face had gone pale and whose hand was cutting off the circulation in mine. “It wouldn’t be fair not to take a load across, since we’re here anyway. Plus, if I let them go for too long, they come looking for me on the other side. “

I ushered the first thirty or so on board and gave Dr. Silverman a seat up front. To his credit, he did a nice job remaining neutral. It’s not a good idea to show fear in front of the newly dead. And when the Banshees swooped in, he promptly produced the tennis racquet and helped swat them from the blood red sky.

“They’re like mosquitoes this time of year.” A talon had shredded the sleeve of Dr. Silverman’s sweater. "I can fix that."  He didn’t look reassured.

The remaining souls were disappointed when I had to leave after only one trip across but I could tell Dr. Silverman wasn’t enjoying himself. I launched us back out of his closet, the wall rebuilding behind us.

He didn’t say anything at first, just stared at me and sighed. Then, he walked to his phone and buzzed his secretary. “Cancel my next appointment, Barbara,” he said. “And, call Violet’s parents. Tell them we’ve made a breakthrough and she’ll be late.”

Without a word, he motioned for me to lie down on the little sofa in his office. He tucked a handmade quilt around me, then turned off the light. From the glow of his office door, he said, “Goodnight, Violet.” Then, he left.

As I said before, some people you just know you can trust—with anything.
by Genevieve Jack at 9:00 AM
Email ThisBlogThis!Share to TwitterShare to FacebookShare to Pinterest

A man who longs for a son and a boy who can't escape his father's violence. Even death can't break their bond.

Alex is a machine whisperer. He can tell what's wrong with a broken-down car with a touch. But his gift can't save him from the brutality of his meth-addict father. For two years, Alex experienced kindness through Cole, his mentor. Now Cole's dead, and the violence in Alex's life is escalating.

When Cole reappears as a ghost, Alex clings to the tenuous link. Then he learns Cole might've sacrificed his chance to cross over. Jade, the first girl to look beyond Alex's past, assures him Cole can reach the Other Side-if Alex escapes from his dad. But a previous terrifying attempt has convinced Alex it's impossible. Unless he can find the courage to try, his friend may be earthbound forever.

"Dead Heat blew me away. It's a gritty ghost story interwoven with all-too-real subject matter that will make you cry for Alex, ache for Cole, and thank God for Jade. I was invested in these characters' lives and you will be too."

In addition to being a YA author, Lisa is a retired amateur stock car racer, an accomplished cat whisperer, and a professional smartass. She writes coming-of-age books about kids in hard luck situations who learn to appreciate their own value after finding mentors who love them for who they are.


by Genevieve Jack at 7:52 AM
Email ThisBlogThis!Share to TwitterShare to FacebookShare to Pinterest

Life Lessons from my Guinea Pig

Mother Teresa - "Be happy in the moment, that's enough. Each moment is all we need, not more." 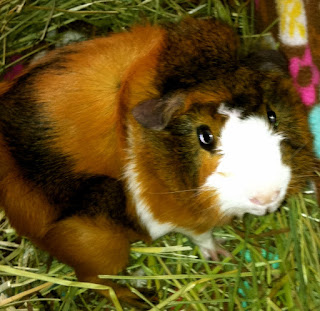 My guinea pig lives in a large environment in my office.  Every day, as I'm dealing with the frustrations and minutia that are inherent in being a writer and small business owner, I pause to give him a scratch behind the ears. Here's what I've learned from the little guy.

9.  People like it when you jump for joy when you see them.

7. Worrying does not put treats in the bowl but sometimes a well timed squeal will.

6. It's okay to be vulnerable.

5. You've got to have faith. There are some things you can't control.

4. Stressed? A nap in a dark place usually does the trick.

3.  A clean house is overrated.

2. Most of what you need, you already have.  The rest you can get by trading what you have with others. Like joy for food and cage cleaning services.

1. If you are loved, even by a furry rodent or a neurotic writer,  it makes all the difference.
by Genevieve Jack at 9:25 AM
Email ThisBlogThis!Share to TwitterShare to FacebookShare to Pinterest
Newer Posts Older Posts Home
Subscribe to: Posts (Atom)