Back to School: A New Start

I love the fall.  There's nothing better than the orangey-red of late September's foliage in my state, or the comfort of the season's first fleece. But beyond that, years of schooling have conditioned me to think of  fall as a time of new beginnings.  Of course, I was the type of student who'd get excited by the sight of a new backpack or a bouquet of freshly sharpened pencils. I went to college not once but twice, the first time for accounting and the second for nursing. I'm convinced that the writer in me simply loves to learn.

But once adulthood hits you square in the jaw, you realize what a gift it is to have a "new semester". New beginnings become happy surprises. Responsibilities snowball. And the calendar doesn't quit flipping for anything.

This week I've been finishing up my new paranormal romance novel titled The Ghost and the Graveyard.  I'm releasing this book under the name Genevieve Jack because it is written for adults and I don't want anyone confusing it as a young adult title. 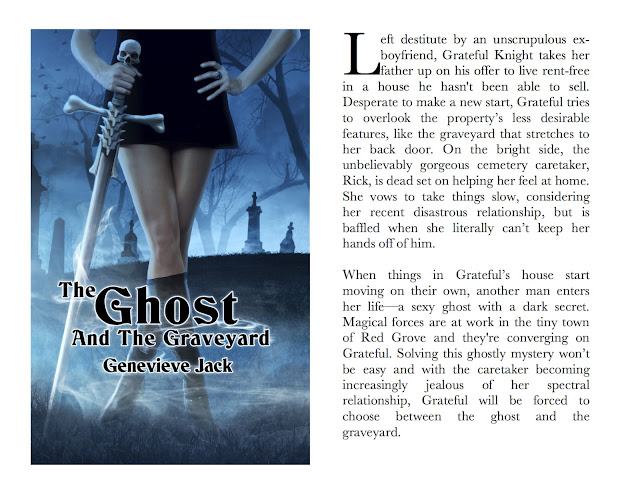 But a new series under a new name is not without its challenges.  Sure, it's a brand new start to do all of the things I wish I'd done with my first series.  But it also feels like starting from scratch.  I've had to build out a new website www.genevievejack.com, set up a fledgling blog (thank you to BOTH of my followers), and set myself up on Goodreads.  My adult readership will likely be different than my YA readership, so I'm contacting entirely different book bloggers.  You could say I've gone back to school, learning how to market this genre from the ground up.

Maybe it's apt then that I'm undertaking this venture in the fall when everyone else is going back to school too. New beginnings, hope for an amazing future, fresh notebooks and pens full of ink... I hope you enjoy this time of year as much as I do!
by Genevieve Jack at 2:04 PM
Email ThisBlogThis!Share to TwitterShare to FacebookShare to Pinterest

Liars and Cheaters, Oh My!

Last week, Cameron van der Burgh admitted to cheating in the 100 yard breaststroke at the Olympics by using an illegal dolphin kick. The south african gold medalist was quick to say that he was not the only one and that it is widely known that if you want to win, you have to cheat. The report came on the heels of a New York Times story about a hospital that was performing unneeded cardiac surgeries to defraud medicare and insurers out of millions of dollars. And today, a report of a young competitor caught cheating at...Scrabble.

As the mother of two daughters, I try to teach my kids to do the right thing.  Honesty is the best policy. Cheaters never prosper. But more and more I see liars and cheaters proliferating in the highest echelon of our society. Our leaders and heroes, caught red handed, issue less than heart felt apologies and act as though their behavior is business as usual.

It begs the question, is our world so complex and competitive that people have to cheat to win? And is winning so important that it's worth compromising your soul? I mean, if the boy came in second at Scrabble, would a room full of puppies die?  And by what stretch of the imagination does a hospital justify risking lives to enhance the bottom line?

I think we often hear about fraud on an individual level, but perhaps cheating has become systemic. Maybe the bar has been raised to a point that no human being can reach it without a little help. But I think the bigger issue is that people still believe the bar is worth reaching.

So, I tell my kids, there is nothing wrong with living a simple life. To be loved and to love yourself, to look yourself in the mirror every morning with a clear conscience, goes a long way toward authentic happiness. And I have to think, if there was someone in the pool swimming against Cameron who did not cheat, that person will have a story to tell to their grandchildren about how they didn't win the medal but earned a more valuable prize--their integrity.
by Genevieve Jack at 9:46 AM
Email ThisBlogThis!Share to TwitterShare to FacebookShare to Pinterest

Are you an adult who loves to read hot paranormal romance such as J.R Ward's Black Dagger Brotherhood series or Charlaine Harris' Southern Vampire series? Do you have a blog where you review these types of books? Would you be interested in reading the first book in a new, original, sexy paranormal romance series for free?

I am looking for bloggers to participate in the cover reveal and ARC review of my next series of books for adults written as Genevieve Jack.  I can not stress enough that this is not a young adult novel and it does contain sex, violence, and adult situations. The professionally edited ARCs will be ready by September 1st.

If you are interested in more information, please email me at authorgenevievejack@gmail.com.  Please include a link to your blog.  Thank you!

Author Genevieve Jack on-line is still under construction but you can be the first to follow her at: