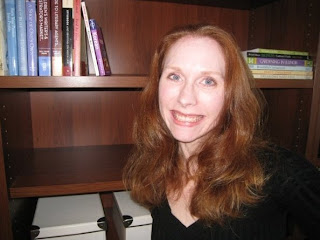 Please welcome Megg Jensen to So, Write. Megg recently released her debut YA fantasy novel, Anathema. I've had the pleasure of reading this one and can tell you it's the type of book you devour in a day. Here's what Megg had to say about herself and her book.

Tell us a little bit about yourself.

[Megg] I have been a parenting journalist since 2004, but my dream since I was a little girl has always been to write and publish a novel. I grew up on a farm and even though we watched every penny, my mom always bought me any book I asked for. Somehow that made books more special than any other item in a store and I read voraciously. In late 2008, I decided it was time for me to sit down and write a novel. I'd written two previously, but this time I was serious. I wrote Anathema in January of 2009 and never looked back. 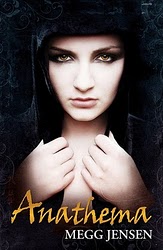 What is Anathema about?
[Megg] Reychel is a slave girl surrounded by magic, lies and manipulation. Her best friend disappears in the middle of the night leaving Reychel to face her fifteenth birthday, the day her master burns his brand into the back of her bald head, alone. She's sheltered from the outside world and doesn't have any hope for escape, but when people desperate for freedom ask for her help can Reychel learn to believe in herself?

What gave you the idea for Anathema?

[Megg] One afternoon, my family was driving down to my parents' farm. My daughter, then five, told me she saw things in the clouds. I asked her what shapes she saw, but she sighed and told me she wasn't looking at shapes - she was seeing the future. (Obviously a wild imagination is genetic.) That little comment of hers sparked the basic idea for Anathema.

Anathema is your first novel. What do you feel was the most difficult part of the process from first draft to publication?

[Megg] The writing comes easily and I also really enjoy editing. The hardest part for me was making the decision to self publish instead of pursuing traditional publication. It took me nearly a year to come to the decision and in the meantime I did submit to agents, but I did not exhaust all of my options in traditional publishing. After researching both sides and really being honest with myself about what I wanted from my career, I chose to go indie. I can't imagine I'll ever regret it.
What type of reader do you think will love this book most?

[Megg] Even though my genre is fantasy, Anathema focuses more on relationships than a fantasy world. So while I'm dropping the reader into an unfamiliar world, I don't bombard them with the setting. This makes my book accessible to anyone who likes romance, mystery and intrigue. Is there romance? Sure. But it's definitely rated PG, so anyone twelve or thirteen and older could read it without fear of stumbling upon something inappropriate. Will guys like it? Hopefully, but it's definitely slanted towards the ladies.
Visit Megg Jensen at http://meggjensen.blogspot.com/ today to learn about her Anathema launch party contest where you can enter for a chance to win your choice of Nook or Kindle!!
Thank you for being here today, Megg, and good luck with your contest!
by Genevieve Jack at 7:48 AM
Email ThisBlogThis!Share to TwitterShare to FacebookShare to Pinterest
Newer Post Older Post Home