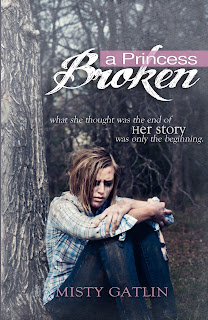 Misty Gatlin is visiting today on the A Princess Broken blog tour.

Sarah defines herself as many things:  broken, damaged, addicted, and hopeless.  Hurt at an early age by someone dear to her, she retaliates by living a life filled with destruction.  Her past has finally caught up with her, and she’s ready to call it quits.  Her story unfolds when she meets a compassionate stranger who helps her realize past decisions don’t define who she is, and what she thought was the end of her story is only the beginning.  A life-changing decision is placed in front of her, and she’s forced to face it head on.  What will she choose, and where will that path lead her?

I asked Misty the following question about Sarah her MC:

If your main character was a real person, what would her room look like? Her wardrobe? What music would be on her ipod? What group would she hang out with at school?

Sarah is the main character in A Princess Broken.  She’s a 15 year old who has a rather large story to tell.  She has no home and has been on the streets for a long time, but we get a pretty good glimpse into her style later in the book.

She’s simple in her style and would likely dress in jeans and a fitted T-shirt with some type of colorful design or words.  She’s not into spending hours fixing her hair and makeup, so her hair would usually be up, and her makeup would consist of eyeliner and mascara only.  Even without makeup she is beautiful.  She would always be seen with a simple, feminine tiara necklace.

Her room would be colorful.  Bright neon colors would radiate from her comforter and pillows, and one wall would be covered floor to ceiling with pictures torn from magazines.  You might look in her room and discover something seemingly out of place; a pink box with pink feathers on top would be sitting on the edge of her dresser.   Nowhere else would pink be seen in her room, so it would stand out like a sore thumb.  Once you hear her story in its entirety, you’ll know why it’s there.

Music would always be playing in her room, but it’s always different.  Her moods change, and because she is such a music lover, her music reflects the mood she’s in.  Although her playlist consists mostly of hard rock and pop, she also enjoys hip hop and rap.  Her philosophy is if you can dance to it, it’s worth listening to.

Sarah would hang out with a small group of people.  She doesn’t feel comfortable in crowds, so you would usually see her with the same two or three people every day.  She doesn’t pay attention to labels or cliques and wouldn’t allow herself to be labeled into a particular group.