Inside a Writer's Mind 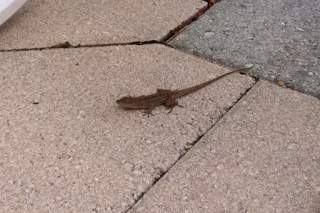 I'm in Orlando, Florida this week with my family on spring break.  If you've never visited Florida, you may not know that the entire state is covered in tiny lizards. To tell you the truth, I'm not sure of the species. Everyone's grandparents live in Florida (or at least they think they are your grandparents) so everywhere you turn there is an octogenarian offering you free information about the state and it's wildlife. Poolside rumor has it that these little guys can drop their tails when they get scared.  The tail will continue to flop around, distracting an attacking predator while the lizard gets away.  Over time the lizard can regenerate it's tail.

For most tourists, the story would end there but for a writer like me, it's just the beginning. I proceeded to tell my family and the informing octogenarian about how interesting our world would be if people could drop their appendages in a similar way.

There would always be "that kid" in school.  You know the one who is afraid of everything.  He would drop his arms every time someone said "boo."  Bullied kids would constantly have stubs. Kindergarten teachers would rue the first week of school and the accompanying slew of dropped arms.

Parents who wanted to bury their children's lost limbs would have to dig through a "lost and found" where invariably decomposing arms would be confused and arguments of ownership would ensue.  Frequent droppers would be forced to wear identifying jewelry.  Athletes would be specially trained to not drop under stressful circumstances and wrestlers who gave into the temptation would be harshly teased and immediately disqualified.

Rich parents would buy cosmetic arms for embarrassed droppers.  Unclaimed arms would decay at the bottom of the lost and found, forcing administrators to create a policy of cremation for unclaimed limbs at the end of each week. Secretaries would clean out the limb box at the same time they purged the staff refrigerator of unclaimed brown bags.

If you dropped your writing arm, you would be forced to write with your non-dominate hand.  But if you dropped both of your arms the school would have to provide you special accommodations. Students who conveniently dropped limbs just before a test would be suspect.  Parents would be called.

I could have continued but my daughter begged me to stop and said in hushed tones that I was being "weird" and scaring people.  I guess I was.  But I bet I am not alone. :)

Inside a writer's mind, anything is possible.